Seaforth has another little secret, every day wallabies come down to the long sandy beaches at sunrise, and placidly start their day. 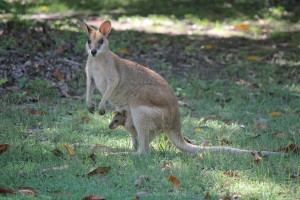 A Seaforth Wallabie and Her Joey

There are plenty of Marsupials (Mammals with pouches) to be found around Seaforth. Some, such as the Common Brushtail Possum, Common Ringtail Possum, Northern Brown Bandicoot, Eastern Grey Kangaroos, Agile Wallabies, Whiptail Wallabies, Unadorned Rock-Wallabies, Swamp Wallabies, and Red-Legged Pademelons.

Monotremes are remarkable mammals that lay eggs, have electrosensitive bills (Platypus) or beaks (echidnas), have spurs associated with a venom system, and feed their young on milk. The Echidna is currently the only recorded Monotreme around Seaforth, but we wouldn’t be surprised if some Platypie were found nearby.

Seaforth boasts a very diverse marine ecosystem. It’s not unusual to see Whales, Snub Fin Dolphins, Sharks or a Turtle on it’s way to shore. The turtles that nest in Seaforth, are mostly Flatback turtles (Natator depressus). Green turtles (Chelonia mydas) occasionally nest in the area and Loggerhead Turtles (Caretta caretta) sometimes nest on offshore islands in the region. All sandy beaches in the Seaforth are considered to be possible turtle nesting sites. The turtle nesting season starts in October and continues through until early to mid January, Turtle eggs hatch until about April.