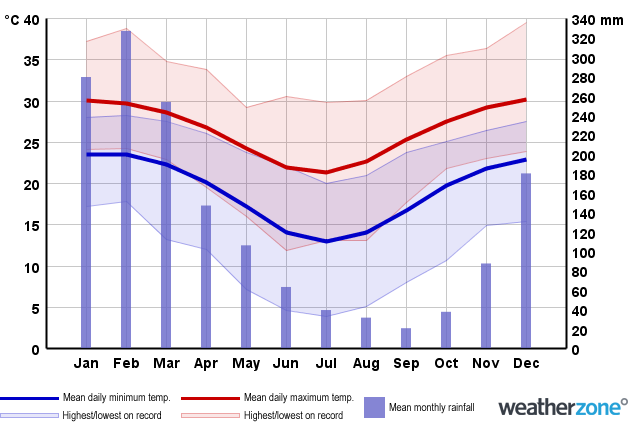 Seaforth has a humid subtropical climate, bordering on a tropical savannah climate. Average maximum temperatures range from 30 °C in summer to 23 °C in winter, while minimums range from 23 °C to 11 °C.

Winters are sunny and fairly dry, with minimum temperatures occasionally dropping below 5 °C, but rarely any lower than 2 °C. Days are pleasant and warm, however occasional cloudy days may keep the temperature below 20 °C all day.

Spring is usually dry, but significantly hotter and more humid than winter, with temperatures beginning to top 30 °C on a regular basis. Occasional thunderstorms may cause heavy downpours, but the very heavy rain will not arrive until later in summer.

December is the start of the wet season which will last until March or April. High humidity, almost daily rainfall and very warm nights are typical of this time of year. Monsoonal low pressure systems and tropical cyclones occasionally affect Seaforth, and cause very heavy, prolonged periods of rain, with totals of up to 200 mm often being recorded in 24 hours during these systems.

Tropical cyclones bring the multiple threats of strong winds, heavy rain, storm tide inundation and high seas to Seaforth. Since 1862 at least 52 cyclones have passed within 150 km of Seaforth. With the latest being Cyclone Dylan on the 31st of January 2014. The greatest natural hazard impact upon Seaforth was caused by the cyclone on the 21 January 19181 which resulted in 1141 mm of rainfall over 3 days, a storm surge of over 3.6m and estimated wind gust of 195km hour. These combined effects damaged or destroyed most of the buildings, decimated the all the towns crops and changed the face of the landscape and beach front forever.

1 Naming of cyclones stopped in 1902 when Queensland Government Meteorologist Clement Wragge retired, and stayed this way until 1963 when the Bureau of Meteorology started the practice up again 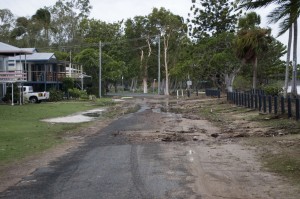